Eleven former players, coaches, and administrators were approved by the Valley Baseball League Board of Directors as the Charter Class to the VBL Hall of Fame, according to League Commissioner and President Don Lemish.  The Charter Class was inducted at the VBL All-Star game on July 10.

Inductees are Dave Biery, Jim Lineweaver, Jim Phillips, Bob Wease, Dayton Moore, Jimmy Key, David Eckstein, Johnny Oates, Charles “Tootie” Geil, John Radosevich, and Mike Bocock.  Biery and Lineweaver were unanimous choices by the nine-member committee appointed by Lemish to review nominations and recommend the first class to the Board.  All other inductees received a majority of votes from the committee.  A total of 66 persons were nominated in this first year and 36 received at least one vote or more from the committee.

Served as President and Commissioner of the Valley League from 1985-2012… Oversaw the expansion of the league from six to 12 teams during his tenure… The VBL became a founding member of the National Association of College Summer Baseball (NACSB) during his time… Oversaw the league’s move to wooden bats, and served as vice president of the National Alliance of Collegiate Summer Baseball.

Namesake of the league championship trophy… He first worked in the league as Harrisonburg’s Business Manager in 1934 and was a member of the VBL Board of Directors from 1963-1990… Along with several decades in the front office of the Harrisonburg Turks, he held various administrative roles with the league, including Public Relations Director, Executive Vice President and Executive Secretary… Still active in the league when he passed away on January 3, 1990.

Has worked for the Winchester Royals franchise for 38 years… Winchester has won 13 VBL championships during that time… Served as the Valley League Treasurer from 1996-2012, and Media Relations Director in 1998… Treasurer of the National Alliance of College Summer Baseball from 2004-2010… Represented the VBL at the ABCA Convention for 15 years… Recognized by the Middle Atlantic MLB Scouting Association for contributions to amateur baseball.

Played seven seasons in the Valley League, with the Harrisonburg Turks (1960, 1968), New Market Rebels (1961-63, 1967) and Shenandoah Indians (1969)… Reached the championship series in 1963 and 1968… Won eight Rockingham County League titles as a player and one as a manager… Elected to the RCBL Hall of Fame in 2013… Currently serves as owner and manager of the Harrisonburg Turks.

Managed the Winchester Royals from 1992-93 after spending the previous two seasons as an assistant coach, winning Valley League championships in 1992 and 1993… General Manager of the 2015 World Series champion Kansas City Royals… GM at Kansas City since 2006… Began his professional career with the Atlanta Braves organization in 1994 and moved up to Assistant General Manager in 2005… Won the American League pennant in 2014… Finished second that year in The Sporting News’ MLB Executive of the Year voting. 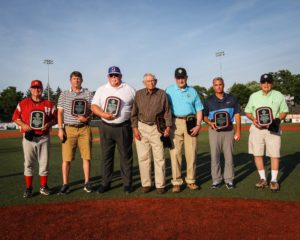 Member of the Harrisonburg Turks in 1963 and 1964, winning a VBL championship in 1964…Threw a no-hitter in the playoffs on August 15, 1964 vs. Craigsville… Named league MVP in 1964 after compiling a 16-1 record… Played three seasons in the Los Angeles Dodgers’ minor league system… Led West Virginia University to the NCAA tournament in 1964 and 1965… Still holds his school’s records for career strikeouts (339), singleseason strikeouts (123) and single game strikeouts (22)… Elected to the WVU Hall of Fame in 2010.