Seven former players, coaches, and administrators were approved by the Valley Baseball League Board of Directors as the second class of the VBL Hall of Fame, as announced by League Commissioner and President Don Lemish.

The second Hall of Fame class was voted on by a nine-member committee, with 35 candidates receiving at least one vote. The 2017 inductees are Wayne Comer, John Kruk, Claude “C.C.” Michael, Sam Perlozzo, Earl Shirkey, Marion “Bo” Trumbo and Maynard “Mo” Weber. Individual plaques were presented to inductees and the second class was recognized at the VBL All-Star Game on July 9, 2017.

Played for the Shenandoah Indians in 1961, winning a VBL championship… Won a World Series in 1968 with the Detroit Tigers, recording a hit in his only at-bat of the series… Played 12 seasons of professional baseball, including five in the majors with the Tigers (1967-68, 1972), Seattle Pilots (1969), Milwaukee Brewers (1970) and Washington Senators (1970)… Coached at Spotswood High School, winning a Valley District championship and Coach of the Year honors in 2000.

Played for the New Market Rebels in 1981, leaving to join the San Diego Padres’ system before New Market’s VBL 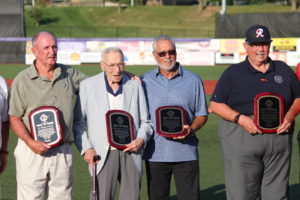 championship series appearance that year… Played 10 seasons in the majors with the Padres, Philadelphia Phillies and Chicago White Sox… Was named to the National League All-Star team in 1991, 1992 and 1993… Currently works as a broadcaster with the Phillies, following a long run as an ESPN analyst on Baseball Tonight.

Served as VBL president from 1946 to 1967… Oversaw the reorganization of the league in 1946… Also served as the first commissioner of the Rockingham County Baseball League and as president of the Virginia Mountain League… The VBL MVP award was named after him in 1972.  In his years as president of the VBL, Mr. Michael would go to Spring Training in Florida each year and beg MLB general managers to give him bats and ball.  He usually returned to Harrisonburg with at least two dozen baseballs and three dozen bats for every team in the league.  This was the beginning of the VBL getting grant money later from MLB.

Played for the Waynesboro Generals and New Market Rebels… Served as manager of the Baltimore Orioles for 300 games from 2005-2007… Has also been an assistant coach with the New York Mets, Cincinnati Reds, Seattle Mariners, Orioles and Philadelphia Phillies… Won a World Series ring in 1990 with Cincinnati… Played in the majors in 1977 with the Minnesota Twins and in 1979 with the San Diego Padres.

Longtime scorekeeper for the Harrisonburg Turks… Elected to the Harrisonburg High School Hall of Fame after working at their basketball scorer’s table for 51 years… Also a longtime clock operator for the James Madison basketball teams… Has volunteered over 10,000 hours at Rockingham Memorial Hospital… Taught at Asbury Methodist Church for 31 years.

Played for the New Market Rebels… Employed as a scout for the Cincinnati Reds, New York Mets, Boston Red Sox, Texas Rangers, Atlanta Braves and Seattle Mariners, and worked for the Major League Scouting Bureau… Was named the Middle Atlantic Major League Baseball Scouts Association’s Supervisory Scout of the Year in 1996… Has been elected to the Salem-Roanoke Baseball and Bridgewater College Athletic Halls of Fame.

Coached baseball for over 65 years, including the final 17 as hitting coach for the New Market Rebels… Served as the head coach at The College of William and Mary in 1965 and again from 1978-1981… Was later the General Manager of the Peninsula Pilots, a White Sox affiliate in the Carolina League… The VBL Coach of the Year award was named after him in 2008… His #1 jersey has been retired by the New Market Rebels.