The Valley League Board of Directors has announced the fourth class of Hall of Fame inductees, to be installed at the 2019 Valley League All-Star game in Harrisonburg on July 7th.

This class was voted on by a seven-member committee, with 30 candidates receiving at least one vote. The 2019 inductees are Bruce Alger, Lorenzo Bundy, Mike Cubbage, Larry Dofflemyer, Jim Kite, Juan Pierre, and Mo Vaughn.

Has dedicated 54 years to the Valley League and New Market Rebels… President/General Manager of New Market for over 20 years… helped lead the team to League championships in 2002 and 2018, with runner-up finishes in 1981 and 2003… has been the “Voice of the Rebels” for 46 years and almost 1,000 games… served on the League Board of Directors for over 25 years… was Vice President of the League seven years… elected Commissioner/President of the League in 2017, is currently in 3rd season in that role… is active in the community of New Market, winning “Outstanding Citizen of the Year” from the New Market Chamber of Commerce in 2009. 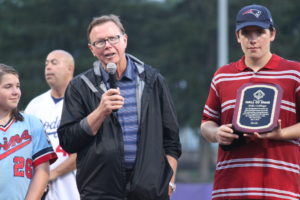 1969… played in the major leagues from 1974 to 1981 with the Texas Rangers and Minnesota Twins… coached in the minor leagues from 1983 to 1989, winning regular season titles twice… coached in the major leagues for 14 years, including a stint as the interim manager of the New York Mets in 1991… worked as a scout in 2004, and 2006-2014 for the Houston Astros and Tampa Bay Rays… since 2015 is Special Assistant to the General Manager for the Washington Nationals… elected to University of Virginia’s Hall of Fame in 2018.

Played for the Harrisonburg Turks in 1997… had 13-year major league career… won World Series with the Florida Marlins in 2003… was 6th in National League Rookie of the Year voting in 2000… Led the National League in hits twice, triples once, and stolen bases three times… Received votes for the MVP award in 2003 and 2004… stole 614 bases in his career, 18th all-time.