While her husband Bob is the baseball guy, Teresa Wease is considered the heart and soul of the Harrisonburg Turk franchise… operations manager for 33 years, she runs almost everything that happens at a Turks game besides the game itself… she has prepared team meals, coordinated community relations, sold advertising, sold merchandise, prepared folders for the coaching staff, hosted players, prepared the game rosters, swept the bleachers, taken out the trash, and even been the mascot… and she has done all of this with a smiling face and selfless, caring attitude. We are a better league with Teresa in it. 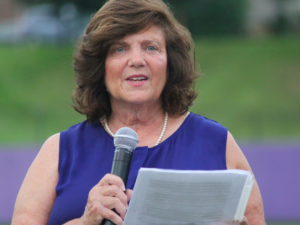