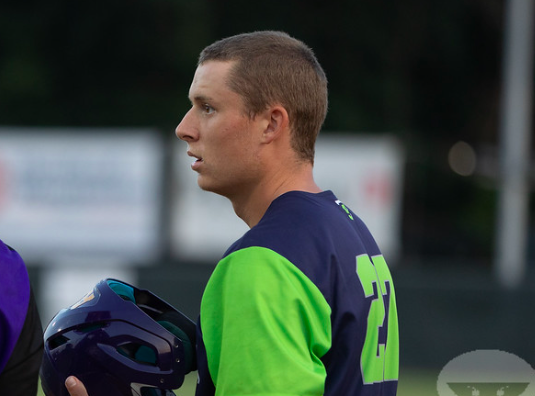 The Charlottesville Tom Sox grabbed the advantage in the championship series with a dominating 7-1 victory tonight.

Charlottesville’s Carter Cunningham (pictured- PC Michael Terndrup) got things going right away in the first when he ripped an opposite field HR w/ one out off Christian Gordon.

In the bottom of the inning, RJ Stinson manufactured a run almost by himself, when he singled to left, stole second, went to third on a groundout, and dove home safely on a wild pitch. Little did the home fans know, however, that this would be it in the scoring department for the Bandits.

Charlottesville struck for three in the fifth inning against Gordon, cashing in on a bout of wildness. Kyle Edwards walked to lead off, Brody Moss walked, and then Christian Martin walked to lead the bases. Carter Cunningham walked to force in the first run, and after Cole Wagner struck out, Trey Yunger singled to right field, scoring Moss and Martin. After Garrett Spikes walked, Jacob Glenn came in and got Kalvin Alexander to pop up and Logan Amiss to ground out.

In the bottom of the fifth, John Lycette ripped a ground rule double to right with one out. After Frankie Ritter popped out, RJ Stinson hit a hard grounder in the hole, but Kyle Edwards showed great range and a strong arm to throw Stinson out at first.

Charlottesville threatened with two outs in the seventh when Trey Yunger and Garrett Spikes walked. Kalvin Alexander hit a grounder up the middle, and after Frankie Ritter initially fumbled the ball, he recovered and alertly fired home to get Yunger trying to score.

In the ninth inning, against new Bandit pitcher Eli Lam, Carter Cunningham walked to lead off, and then Cole Wagner, after fouling pitches off everywhere (and being helpfully reminded where fair territory is by a teammate, ripped a single into center. Trey Yunger sacrificed them both up a base, and after a Spikes strike out, Alexander ripped a single to left to score two more and put C-ville up 6-1. Alexander subsequently stole second, went to third on an errant throw, and scored on a passed ball.

So while the offense scored plenty for Charlottesville, the real story was the pitching. Drew Bryan earned the win with five excellent innings, allowing only one run on two and two walks while striking out six, and Jackson Nove was fantastic in relief, firing three perfect innings with four K’s. Trey Yesavage came in to close things out and threw a perfect ninth.

The Bandits will travel to Charlottesville for game two Wednesday night and attempt to keep their title hopes alive. Game time is 7 PM.