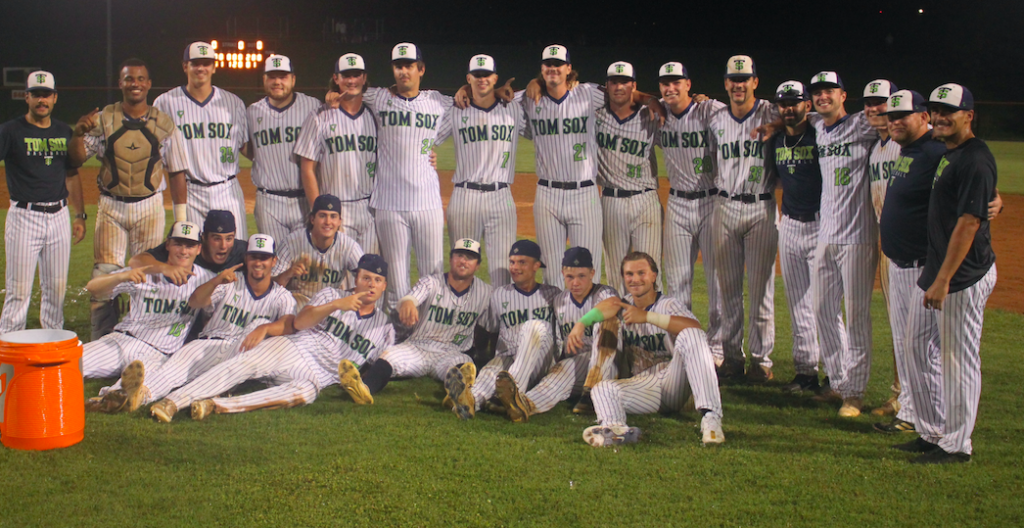 Charlottesville has gone and done it again.

Hunting the franchise’s third title in five seasons, the team finished off a clean sweep of three straight playoff series to bring home that third trophy.

Heading into this series, many thought that Woodstock’s pitching had a real chance to shut down the Sox offense, but it turned out to be the exact opposite- the Charlottesville staff was dominant.

Tonight it was starter Christian Howe who fired six shutout innings and allowed only five hits, no walks, and struck out seven. After a bit of wildness from Wyatt Lunsford-Shenkman (see below), Tyler McLoughlin finished things off similarly to Sam Crawford in 2019, getting the last seven outs- six by strikeout- to close the book on the 2022 season.

As for the offense, Charlottesville struck early against Kelan Hoover, the North Pitcher of the Year. In the second inning, Christian Martin worked a bases-loaded walk to put the Sox up, 1-0. Garrett Spikes added one to the total with a solo shot to right field in the third, and Carter Cunningham added a third run with an RBI groundout in the fourth. Martin struck again in the fifth with a two-run double, giving the home team a 5-0 stranglehold on the game.

The Bandits didn’t quit, though, and thanks to some patience at the plate and some wildness from reliever Lunsford-Shenkman, struck back with two in the seventh. In total, five Bandits walked in the inning, including two with the bases loaded. McLoughlin came in to get the last out of the inning to limit the damage- a groundout to third. The Bandits threatened yet again in the eighth, when Tomas Sanchez reached on a dropped third strike and Jalen Buster walked with two outs… but McLoughlin struck out RJ Stinson, his fourth K of the inning, to end that chance.

McLoughlin showed a live fastball (he’s been clocked at 95 this summer), and a bulldog mentality on the mound. Some pitchers wait in the dugout a bit before heading out to the mound. Not McLoughlin- he was the first one to cross the white line when it was time, almost running out to start the next inning. After the game, he said, “I’m just riding the adrenaline… you know, just black out. Don’t think; just throw and have fun.”

Head Coach Ramon Garza most likely became the first person to win a VBL title both as a player and head coach in the process. Soaking wet from a gatorade shower after the game, Garza said, “I’m so proud of this group of guys and how resilient they are, working every day to get better. They learned a lot this summer, and we get to represent the city of Charlottesville and win a championship.”

Indeed they did- and now the team has a third trophy to join the first two.