Safe at Home: A Season in the Valley Updated 2nd Edition 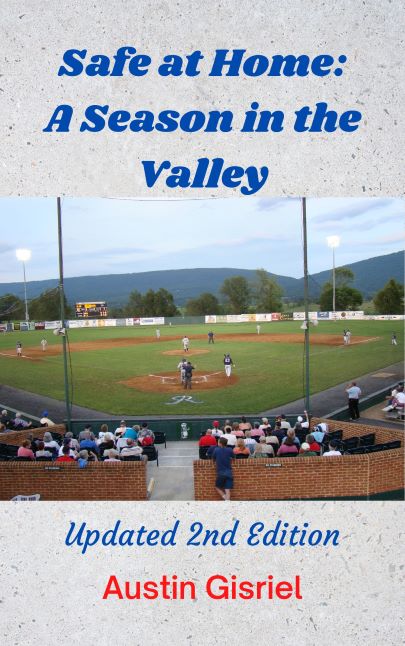 An updated edition of Safe at Home: A Season in the Valley, has been published by
author Austin Gisriel. The book chronicles the 2009 New Market Rebel season.
“So much has happened in the 13 years since then,” said Gisriel. “Several of the most
important ‘characters’ such as Mo Weber, Bruce Alger and his wife Lynn, and ‘Front
Row’ Fred Miller are no longer with us. I thought it was important to recognize the
changes that have happened to the Rebels organization and to the league in general.”
Gisriel noted that the players from that year are now at least 30 years of age with
established careers and burgeoning families.
“Several former players shared updates on their lives, as did four of our coaches. It was
wonderful to hear from them,” said Gisriel. “It was also wonderful to hear how much
they treasure their time in the Valley. The Rebels didn’t win it all that season, but I
couldn’t have had a better team to write about. Safe at Home is really the story of a
community’s passion for baseball as much as it is the story of what happened on the
diamond.”
Gisriel points out that perennial playoff participants Charlottesville and Strasburg
weren’t even in the Valley Baseball League in 2009, which still included the Fauquier
Gators.
Safe at Home: A Season in the Valley, Updated 2nd edition is available in both
paperback and Kindle e-reader versions through Amazon.com