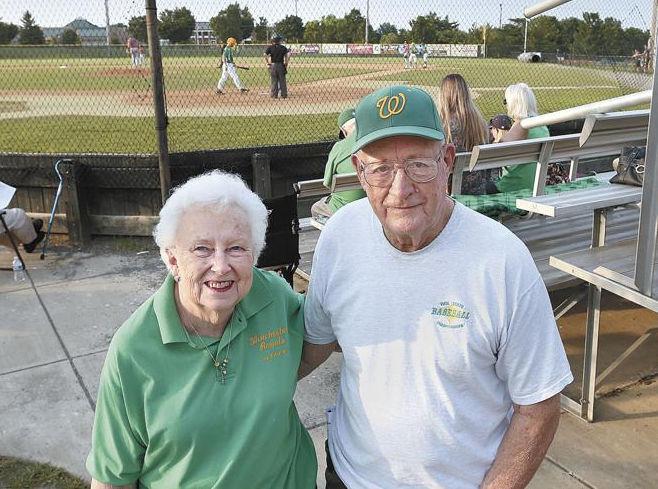 Jim Phillips, a man synonymous with the Winchester Royals, died late Friday night at the age of 87.

Phillips had a role with the Royals in every season since the Valley Baseball League franchise was created in 1979, including this past year as an emeritus Board of Directors member.

Jim Shipp — a current board member who has worked with the Royals for 36 years — said in a phone interview on Saturday night that Phillips dealt with two different types of cancer over the past two years. The latest cancer developed in the past two months.

Phillips wasn’t able to attend any of the Royals’ games this past year, but the collegiate wooden bat summer league team was never far from his mind.

“Even with the pain he was in with his cancer, he was still talking Royals with [my wife] Karen and I when we would stop by [to visit him],” Shipp said. “The Royals were certainly a big part of his life.”

Phillips started out as a public address announcer with the Royals in 1979, the same year that Bridgeforth Field opened in Jim Barnett Park. He eventually would have a hand in just about every aspect of the organization, which he discussed in 2016 when he was interviewed by The Winchester Star for being one of nine people inducted into the VBL’s inaugural Hall of Fame class.

Phillips said, “With the Royals, I’ve been the vice president, the general manager, and in charge of game day operations. I’ve been the official scorer, and I’ve driven the bus. I’ve done everything but probably working in the concession stand.”

Phillips was a 1955 Clarke County High School graduate. He married Betty in 1960, the same year he moved to Winchester, and celebrated his 62nd anniversary with her on Oct. 28. Betty has also been involved in every Royals season since the inaugural year.

Phillips was an Air Force veteran who logged four years of active duty, 17 years in active reserve, and 12 years of on-fly status with over 2,000 flight hours as an instructor and loadmaster.

Phillips was inducted into the VBL Hall of Fame not just because of his work with the Royals — owners of 13 championships from 1979-2004 — but also for the league as a whole. He served as VBL treasurer from 1996 until 2012, and also served as the treasurer of the National Alliance of College Summer Baseball from 2004-2010.

Phillips is also a member of Handley’s High School’s Hunter Maddex Hall of Fame (class of 2011) for his contributions to the Judges’ football and baseball programs.

Millbrook High School baseball coach Brian Burke first worked with Phillips on the Royals from 2001-14. After taking time to coach his son Hayden (now 19 years old), he returned to the Royals’ Board in January and is serving as Winchester’s general manager.

“Undoubtedly, he was the face of the Winchester Royals,” Burke said. “Everybody knew Jim Phillips. He was always open to conversations with everybody. He had tons of stories, whether they were baseball-related, or something else. He was just a good person to everybody he came across. He always had time for people.

Phillips and his wife served as a host family for Royals’ players for much of his time with the organization, and Shipp noted that Phillips kept in touch with as many players as he could once they left the Royals.

Jason Johnson won a VBL title with the Royals as a player in 1992, and returned to manage Winchester to the 2003 championship while he was a high school coach in Atlanta. Now in his 26th year of coaching, Johnson is currently the head baseball coach at Mountain View High School in Lawrenceville, Ga.

“He’ll always be Mr. Phillips,” Johnson said. “He’s not Jim. He’s always been Mr. Phillips to everybody, and that tells you the respect that everyone had for him. He was always that guy whose approval you looked for when you walked off the field. Was he proud of you? Did you play well that night, or did you need to turn it up a notch?  But you knew he always had your back. He always supported you.

“He and Mrs. Phillips were like family to everybody. I would describe them as the ‘first family’ of the Valley Baseball League. Every organization felt the same way about him.”

Shenandoah University baseball coach Kevin Anderson managed the Royals from 1989-91 and 2004-05. He guided the Royals to the 1990 title after winning one with Winchester as player while he was at George Mason University in the early 1980s. Well before his Royals’ days, Anderson knew Phillips as his Winchester All-Star Little League coach as an 11-year-old.

“He’s been one of the greatest people I’ve ever known, from the time I was a kid, all through my playing career, coaching career,” Anderson said. “Just a great man. He knew the game inside out. He loved the game of baseball. He was a father figure to many, many people and was a positive influence on a lot of peoples’ lives.

“I’m very blessed to have known Mr. Phillips. He’ll be sorely missed by the Winchester Royals and the Valley League. He’s an icon.”