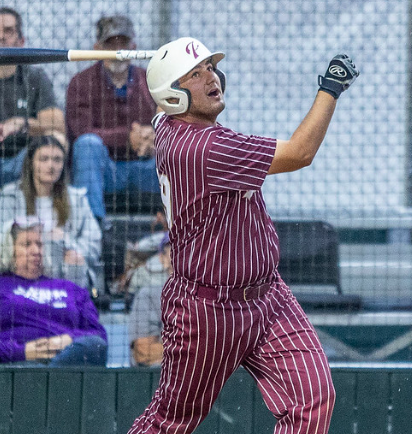 The Woodstock River Bandits punched their first-ever ticket to the Jim Lineweaver VBL finals with a lightning-shortened 9-7 victory in game two of the North finals last night.

It was a game in three parts:

PART I: The Ryne Guida Show

On the very day he was named the North Division MVP, Guida led the Cannons to a 5-2 lead with a three-run home run in the first and a two-run shot in the third. What a day for the young man from Florida International- it’s his world; we’re all just living in it! The Cannon lineup wasn’t done, either- it added two more runs in the fourth on back-to-back RBI doubles by Brady Drawbaugh and Justin Acal. (Guida is pictured as the feature photo on this post- PC Michael Terndrup)

It appeared at this point that the Cannons would extend this series to a third game.

PART II: The Bandits Roar Back

Not so fast- the Woodstock lineup showed some mental toughness, especially for this time of year, by coming back with two runs in the sixth, two in the seventh, and three in the eighth to retake the lead at 9-7.

In the sixth, Tomas Sanchez knocked in two with a double. Hunter Smith hit an RBI single in the seventh, followed by a Jacoby Long RBI groundout, and then in the eighth, the lineup hit three straight RBI singles- by RJ Stinson, Frankie Ritter, and Jack Spyke.

It looked like the game would come down to the wire, when…..

As the bottom of the eighth was about to start, the umpires suspended the game because of lightning in the area. It appeared that the two teams would be in for a long delay, or the game would have to be finished the next day (today, Tuesday) at Woodstock, with a possibility of a third game played immediately afterwards if the Cannons came back to win. (There is a VBL rule that playoff games must be finished.)

After the teams had decided to finish the game today, Purcellville changed course and decided to request that the game be considered final and Woodstock be declared the winner (the Cannons were short on players as it was). The Bandits were informed on their way home (at a 7-11) that they were North Division champs.

(Jacob Glenn is the winning pitcher; Tyler Muscar got the loss.)